Cancer-causing menthol Is 1,600 times stronger in E-Cigs than traditional cigarettes 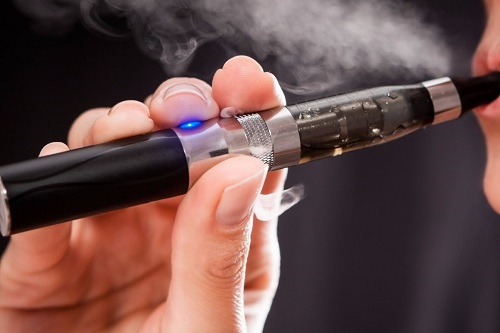 This adds to growing concerns about the health risks of e-cigarettes. Federal health officials continue to investigate recent vaping-related lung injuriesTrusted Source, with 530 cases and eight deaths confirmed so far.

The chemical, known as pulegone, hasn’t been linked to the recent lung illnesses. But in 2018, the Food and Drug Administration (FDA) bannedTrusted Source its use as a food additive due to studies showing it can cause liver and lung cancer in rodents.

The FDA’s ban was in response to petitions from consumer groups.

Yet the agency still allows for this carcinogenic compound, which comes from mint plants, to be used as a flavoring in combustible cigarettes, smokeless tobacco, and e-cigarette liquids.

In a new studyTrusted Source, researchers from Duke University found that people who use certain mint- and menthol-flavored e-cigarettes and smokeless tobacco products are exposed to high levels of this carcinogen.

These were higher than the FDA’s “unacceptable” level for ingestion of this compound in food, wrote the researchers.

The findings were publishedTrusted Source this month in JAMA Internal Medicine.

Dr. Ali Raja, executive vice chairman of the department of emergency medicine at Massachusetts General Hospital, who wasn’t involved in the study, was “shocked” at the level of this chemical in these products.

Researchers found that users of these e-cigarettes would be exposed to up to 1,600 times as much pulegone as smokers of menthol cigarettes.

Raja points out there was also a wide variation in the levels of this chemical, even within the same brand.

“All of them, even at the lowest doses, still aren’t safe,” he said.

In the study, the researchers looked at pulegone levels in five types of e-liquids and one type of smokeless tobacco. They compared these to levels found in several brands of combustible menthol cigarettes.

This data came from studies of e-liquids and combustible cigarettes done by the Centers for Disease Control and Prevention.

One limitation of the study is that there’s no data on how toxic pulegone is when inhaled. So, researchers relied on known risks of oral exposure.

Early research suggests, though, that the risks associated with inhalation are at least two times higher than those due to oral exposure.

The tobacco industry has worked to reduce the level of pulegone in menthol cigarette flavorings, said the researchers in a statement. But e-cigarette manufacturers have yet to follow their lead.

However, Raja says just removing this chemical from e-cigarettes wouldn’t eliminate his concerns about vaping.

“My concerns about vaping are more about the addiction potential, and more recently about the respiratory illnesses caused by other additives in e-liquids,” Raja said.

This is one reason the FDA issued a proposed ruleTrusted Source on Sept. 20 that would allow it to “clear the market of unauthorized, non-tobacco-flavored e-cigarette products.”

This rule would require e-cigarette manufacturers to submit applications to the FDA showing the potential public health benefits and harms of their product.

As part of its review, the agency would evaluate e-liquid ingredients, including their potential toxic effects and impact on health.

Dr. Laura Crotty Alexander, a pulmonary and critical care medicine physician at UC San Diego, says health professionals have been calling for this type of regulation for years.

“Banning flavors is a wonderful step toward trying to limit the appeal of vaping devices to people at risk,” Crotty Alexander said.

A recent national survey of U.S. high school students found that teen use of e-cigarettes more than doubled since 2017.

Crotty Alexander says this huge surge in youth vaping is concerning because “in terms of the actual health risks of e-cigarettes, a lot is still unknown.”

She also says the use of THC — the psychoactive chemical in cannabis — in e-liquids is “extremely high, a lot higher than any of us knew.”

Many of the recent cases of vaping-related lung damaged involved people who reported vaping THC or THC and nicotine products. However, some said they had only vaped nicotine.

While black market e-liquids have been blamed for some of these illnesses, no e-cigarette company has been given permission by the FDA to sell its products in the United States.

“We don’t know if any of the chemicals that are being put in these e-liquids for people to inhale are safe,” Crotty Alexander said.

Some of these chemicals, like carcinogens, may take years to cause health effects.

But Dr. Floyd Livingston, a pediatric pulmonologist at Nemours Children’s Hospital in Orlando Florida, says doctors are also seeing patients with more immediate effects due to vaping, with more than 530 cases reported by the CDC.

In these cases, it’s been unclear whether these illnesses are related to vaping canisters with THC or nicotine.

But Livingston says the risks of e-cigarettes are serious enough that people who vape should consider quitting.

“If they continue to vape, it could put them in the hospital, if not into the critical care unit, and possibly get them a lung transplant,” Livingston said.