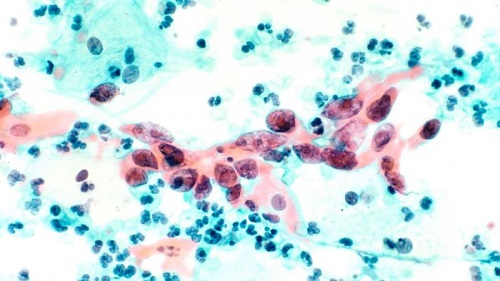 Feelings of embarrassment may be putting Australian women at greater risk of developing cervical cancer.

A nationally representative survey of 1,000 women has found almost a third of women may delay or avoid cervical cancer screening because they find it "awkward", and a quarter because they're "embarrassed".

In Australia, 80 per cent of cervical cancers are found in women who are overdue for screening or have never been screened.

When women were asked what the barriers were to getting screened, around four in ten said they found the test uncomfortable, mostly because it was "painful", "exposing", or they were fearful of the testing process itself.

An estimated 951 women will be diagnosed with cervical cancer in Australia this year, and 256 will die.

While rates of the disease have decreased significantly since the introduction of a national screening program in 1991, as well as school immunisation programs, nearly half of all Australian women are overdue for screening.

The research, published by the ACCF, found almost half of those surveyed were unaware of the changes made to the screening program in 2017, when two-yearly pap smear tests were replaced with five-yearly human papillomavirus (HPV) tests.

The HPV test feels exactly the same as a pap smear, but looks for the presence of the virus (which causes 99 per cent of cervical cancers), rather than checking for precancerous changes in cells.

In light of today's findings, the ACCF has launched a national campaign to increase screening rates across the country to ensure Australia reaches its goal of cervical cancer elimination by 2035.

"We don't want to see women dying from embarrassment or dying because of lack of awareness," Mr Tooma said.

"I knew deep down they were going to pick something up. But I wasn't quite expecting the outcome that I got," she said.

"It was just gut-wrenching. It was horrible to think I wasn't going to see [my sons] growing up.

"I think that was what really made me determined to get better."

Sam, who had always kept up-to-date with pap smear testing, underwent extensive radiotherapy and chemotherapy. She responded well to treatment and her tumour can no longer be detected.

"I've been told it will become active again one day, and that's something I'll deal with if and when it happens," she said.

"But at this stage it's good news, and hopefully it will continue to be good news."

Sam now sees her role as helping to increase awareness of cervical cancer, and to encourage women to participate in screening.

"I'm a single mum with two young kids and cancer certainly wasn't something I thought I'd have to battle with."

Sam encouraged women to push past any hesitations they might have about cervical screening and book in for a test.

"Yes, it can be embarrassing, but it's better to be a little embarrassed than to be told that you've got cancer," she said.

A study published last year in leading medical journal The Lancet found Australia was on track to become the first country in the world to effectively eliminate cervical cancer by 2035.

Professor Ian Frazer, whose research led to the development of the HPV vaccine, said Australia had made significant gains in driving down rates of cervical cancer, but still had a way to go.

"To make it a reality, we must ensure we maintain high rates of HPV vaccination among eligible school-age male and females via the National Immunisation Program, whilst concurrently increasing cervical screening test participation rates from 50 per cent to 70 per cent," he said.

Cervical cancer kills a quarter of a million women worldwide every year. A self-collected HPV test may help to change that.

Both males and females can get HPV, but most people clear the virus without ever knowing they have it.

In a bid to overcome some of the barriers women face when getting screened for cervical cancer, a self-testing process was introduced to Australia's National Screening Program in 2017.

It means women aged 30 and above who are two or more years overdue for screening and who decline a test with their GP are now able to take a vaginal swab themselves (while at a medical clinic), which is then sent for testing.

GP Ginni Mansberg encouraged women to speak with their doctor about the available testing options to ensure the most personalised care was available to them.

"It's perfectly normal to feel uncomfortable — over 40 per cent of women tell us it is — that's why it's important to talk to family and friends who have been through it, to better understand what to expect," she said.

"Better still, your healthcare provider is also there to help you through the process, so don't be afraid to speak up."

The ACCF is urging Australian women aged 25 to 74 to ensure they've had the new cervical screening test by December 2019.