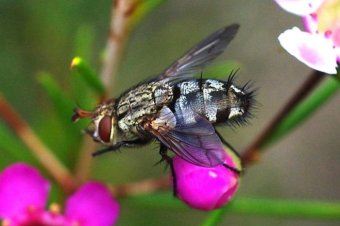 No matter how much you swat, wave, yell, or occasionally swallow flies, their persistence always beats yours. And tropical to start to summer for most of the country has provided the perfect breeding conditions for these pesky insects.

Associate Professor James Wallman from the School of Biological Sciences at the University of Wollongong said fly numbers had increased exponentially recently.

"This combination of warmth and moisture is just nirvana for flies and other creepy crawlies," he told ABC Adelaide's Afternoons program.

Dr Wallman said if you started with one breeding pair of flies, and all of their offspring survived and reproduced, you would end up with a ball of maggots the size of the earth within one year.

"Luckily all of those flies don't survive to reproduce," he said.

The most common flies found throughout Australia are bush flies and blow flies. Blow flies are easily distinguished by the loud buzzing of their wings. They lay maggots in carcases and are attracted to smells similar to that of rotting meat.

Bush flies lay maggots in animal dung and are attracted to moisture. They are mainly found in country areas, near cattle, but could be carried into city areas by prevailing winds. Both flies struggle to survive in temperatures over 40 degrees Celsius and will seek shade on hot days.

Dr Wallman said although flies were annoying, they served an important role in our ecosystem.

"Flies are way more important than they are harmful to us," he said.

Dr Wallman said flies were imperative to breakdown dead animals and return nutrients into the soil.

"We hardly ever see dead rats, birds or mice because the maggots get there straight away and start breaking down their organic matter," he said.

An old farmers' tale of hanging a plastic bag, partially filled with water, has done the rounds as a surefire method to keep flies away.

"I hate to dash your confidence in this one but it really is an urban myth," Dr Wallman said.

"It might make you feel a little bit better, but it does nothing."

Dr Wallman said waging a war on flies was a winless battle.

"There are so many flies around and they breed at such an incredible pace," he said.

"If you set up a fly trap at your backdoor, you would hardly put a dent in the population."

Instead of instantly reaching for the insect spray when a fly is found indoors, Dr Wallman said the better solution was to simply give it a way out.

"Flies will always be attracted to bright windows or bright doors," he said.

"Pull down the curtains, open the door, and the fly will shoot outside."

He said the best way to keep flies off food was to keep it heated to more than 40 degrees or use a semi-spherical pop-out fly net.