How oral allergy syndrome, a form of food allergy, may be linked to your spring hay fever attacks 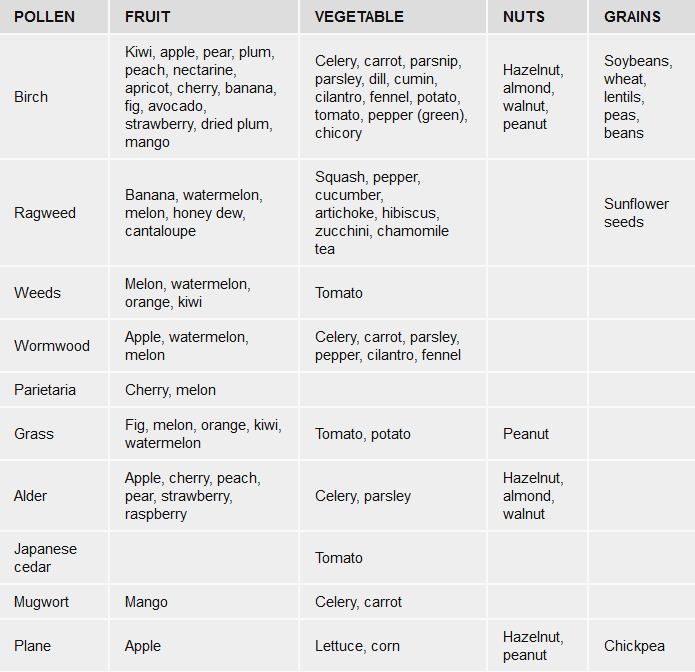 Nikki Atack hasn't eaten raw fruit or vegetables for more than a year because she fears the consequences could be life-threatening.

Growing up on a farm in England, she had all the hallmarks of a fussy eater.

At seven years of age, she started avoiding certain fruits because they made her mouth and throat itchy, and as a teenager she cut several raw vegetables out of her diet.

"There were some things that made my face really itch and sometimes I'd eat something and I would get bumps on my lips … other times my face would swell up," she said.

"But it got to the point when I was about 13 or 14, when I was saying to mum, 'I don't want salad,' and she thought I was being a typical teenager. But she did take me seriously."

Springtime is prime time for attacks

Mrs Atack, 36, suffered from hay fever from a young age and noticed reactions to certain foods were particularly intense during pollen season.

When she moved to Perth 15 years ago, she sought advice from her doctor.

"He essentially said, 'You must be a freak of nature, no one has allergies to fruit and vegetables,' and then over the years it has just gotten worse."

Her symptoms escalated to the point where her throat was closing up and she felt faint.

Earlier this year an immunologist diagnosed her with oral allergy syndrome (OAS), a form of food allergy that is linked to hay fever, after conducting 36 skin prick tests.

The tests found she had 29 allergies, eight of which were strong enough to classify her OAS as severe.

"I am at the point where I don't eat any raw fruit or vegetables because it is too hard to manage. Anything roasted or fried is fine, which is not a very healthy diet," she said.

The link between hay fever and OAS

"Oral allergy syndrome is caused by eating raw fruits, vegetables and nuts in someone who is primarily sensitised to an inhaled allergen such as pollen," she said.

"Usually they have a sensitivity to one or more pollen, and these pollen grains contain proteins that throughout nature, in the plant kingdom, have been highly conserved, which means that you find almost identical or at least very similar structural proteins in a whole lot of plant-derived foods.

"The immune system is tricked into believing that the protein is identical and it will set off a reaction."

The raw food does not cause hay fever, but OAS symptoms tend to be either magnified or only present during pollen season.

Mrs Atack was prescribed an EpiPen because her symptoms were on the severe end of the scale, but for most people the reaction is confined to the oral cavity — an itchy mouth, scratchy throat, or swelling of the lips, mouth, tongue and throat.

"It's much less common to have a full-blown anaphylaxis … however, if people ignore those early symptoms of the tingling and itching in the mouth and throat and were to ingest a bigger amount of that food, they can go on to have a systemic reaction," Dr Katelaris said.

Cross-reactivity: No hard and fast rules

OAS varies throughout the world depending on the type of pollen to which people become exposed and allergic.

"In Australia it's mainly grass pollen and with that you see [a cross-reactivity with] mainly melons and tropical fruit," Dr Katelaris said.

"In areas where you have high birch pollen levels, in Canberra or Tasmania in particular — in cooler climates — the classic there is apple, pear, hazelnut and that's what is very commonly reported in northern Europe.

"There are some patterns that we recognise — if you're allergic to one pollen there may be cross reactivity with certain fruits and vegetables — although that doesn't hold hard and fast."

Types of pollen and food linked to oral allergy syndrome:

OAS has been studied extensively in Europe and the United States, but there have been no significant prevalence studies done in Australia to determine just how common it is.

"I think it's probably under-recognised because people work it out," Dr Katelaris said

"They don't understand the science behind it, but if you put some apple in your mouth and you get tingling and itching and your throat is really itchy, you don't eat the apple."

OAS is more common in adults because that is when pollen allergy is at its peak, but it also affects children, who may come across as fussy eaters.

"It follows the pollen allergy, that comes first. So that's why you don't see it in very young children because pollen allergy is pretty uncommon under the age of three or four," Dr Katelaris said.

"When a mum says, 'I can't get them to eat any fresh fruit,' and you delve further, often it's because it makes their mouth feel very uncomfortable and they don't like it.

"But a child doesn't particularly know how to describe that and will just say they don't like the food, they don't want it."

People who have OAS can generally eat the foods to which they are allergic in cooked form, because the proteins are distorted during the heating process.

Dr Katelaris recommended people either cook or avoid the foods all together.

"We don't usually recommend taking antihistamine and trying to mask it — it won't mask it very well anyway.

"Treating the hay fever is important, but again that won't help the oral allergy symptoms."

That is advice Mrs Atack wished she received years ago.

"As I'm getting older it is getting worse. I think had someone actually taken it seriously and I got diagnosed 10 years ago, it would have made it easier to desensitise and I wouldn't be at this severity," she said.

Mrs Atack is now on a desensitisation program which involves regular injections, with the aim of re-introducing the foods to which she is allergic in three years' time.