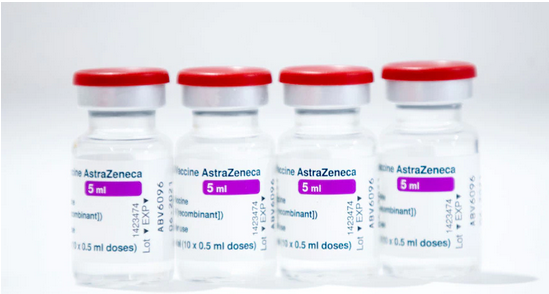 The study, which involved more than 17,000 participants and was published recently in The Lancet, found the vaccine — which most people in Australia will receive — had an 81 per cent efficacy rate when a second dose was given three months after the first.

This dropped to a 55 per cent efficacy rate if the second dose was given less than six weeks after the first.

Jodie McVernon, a director of epidemiology at the Peter Doherty Institute for Infection and Immunity, said the result was not surprising.

"That finding, of a delayed interval between a primary dose and a booster dose giving a better antibody response, is consistent with some other vaccines that we have seen before," she said.

Vaccines for the flu, Ebola and malaria also give greater protection and stronger immune responses after a longer interval between doses.

But Professor McVernon said a longer wait time between doses was not ideal for every vaccine.

"This is where every vaccine needs to be trialled and needs to be studied to work out those doses and what the best interval will be," she said.

Depending on the country, the two-dose AstraZeneca vaccine has been offered to people between four and 12 weeks apart.

"It's great news for Australians because what it's saying is that if you wait three months between your first dose and your second dose, there seems to be a really good increase in efficacy," she said.

But why waiting longer leads to better results is still not clear.

Professor Drummer said she knew of two theories why the 12-week wait between doses led to a higher efficacy rate.

The first theory, she explained, built on the fact that after someone was vaccinated, their body had a reaction to the jab itself.

This reaction is the body's immune system kicking in.

"Some of those molecules that are produced could be quite inflammatory and when you receive the vaccine [shots] in a short window, those inflammatory responses could limit the ability of the immune system to generate a boosting immune response," Professor Drummer said.

The second theory has to do with the make-up of the AstraZeneca viral vector vaccine, which uses a harmless chimpanzee adenovirus to deliver DNA into our cells.

The vaccine contains a viral particle which has the gene for the spike protein, and adenovirus particles are present on the surface of the particle.

Professor Drummer said it was possible our bodies were making antibodies to those surface proteins.

"That means when we get the booster shot, if we get it too soon after that vaccination, the antibodies that we made for the adenovirus protein actually get rid of the booster dose," she said.

"So it doesn't get the opportunity to deliver the spike protein into the cells and for you to then deliver the second round boosting immunity."

High level of protection between doses

What to expect from the COVID-19 vaccine rollout

Researchers also found the first dose offered 76 per cent protection in the three months between jabs, meaning people have high coverage while waiting for their second dose.

"Often we have, when two doses are required for full protection, there might be a lower level of partial protection in the middle," Professor McVernon said.

"But over that time window, we know that that first dose of the vaccine will work well."

The findings in The Lancet are also backed up by a real-world study out of Scotland.

That research, which is yet to be peer reviewed, examined the effectiveness of the first dose of the Pfizer and AstraZeneca vaccines in a national study of about 5.4 million people.

It found a single dose of either vaccine "resulted in substantial reductions in the risk of COVID-19 related hospitalisation", but AstraZeneca outperformed Pfizer.

"I think people should be reassured that the AstraZeneca vaccine is excellent," Professor Drummer said.

"They're both almost equally as good as each other at preventing hospitalisation and even symptomatic mild to moderate COVID."

Professor McVernon said the study in Scotland showed both vaccines were achieving similarly high levels of effectiveness and that early concerns about AstraZeneca's efficacy rate "don't seem to be playing out in reality".

Professor Drummer said the research showed Australia was on the right track with its vaccination rollout.

Both AstraZeneca and Pfizer's vaccine candidates use new technology: the former uses a viral vector, and the later uses messenger RNA (mRNA) encased in a lipid layer, which, until recently, had not been approved for use in a human vaccine.

Professor Drummer said there would be more research about both options in the months and years to come, and that could inform future vaccination programs.

"There's still a lot still to learn about what is the optimal timing and the optimal dosing to get the best efficacy for the vaccine."